Medan, 23 February 2017 – PT Agincourt Resources, the operator of Martabe Gold Mine, contributed almost IDR 6 trillion (US$ 456 million—with rate of IDR 13,000 per US$1) GDRP (Gross Regional Domestic Product) in Sumatera Province region throughout 2010-2015. According to the Final Report of Economic and Fiscal Impact Analysis of Martabe Gold Mine conducted by LPEM-FEBUI (Institute for Economic and Social Research – Faculty of Economics and Business of University of Indonesia), in the level of North Sumatera Province, PT Agincourt Resources contributed IDR4.7 trillion (US$ 361 million) to Provincial GDRP in the same period and as much as IDR 1,24 trillion (US$ 95 million) to GDRP (Gross Regional Domestic Product) of South Tapanuli District.

This study was delivered at the Seminar of Economic and Fiscal Impact Analysis of PT Agincourt Resources in the presence of government representatives of South Tapanuli District and the community, national level Investment Coordinating Board, academia, representatives of Association of Indonesian Mining Professionals, non-governmental organisations, and media at Padangsidimpuan on February 21, 2017 and in Medan, on February 23, 2017.

Dr. Widyono Soetjipto, the head of this research stated that the aims of this research, among others are estimating the economic impacts in the form of gross valued added, household income, and employment opportunity in the level of North Sumatera Province and South Tapanuli District.

“We are calculating the potential of state revenue (fiscal) both for national and regional government and conducting a social economic survey to respondents in 10 villages in Batangtoru Sub-district concerning the impacts of PT Agincourt Resources presence,” Widyono said. This field survey was conducted by LPEM – FEBUI in collaboration with FEB – USU (Faculty of Economics and Businesses – University of North Sumatera) in 2015.

He added that this research combined quantitative and qualitative approaches. The macroeconomic impact analysis was performed by using Input-Output (I/O) method, while the fiscal impact analysis was using the fiscal model of LPEM-FEBUI. The micro impact analysis in the village level was conducted using primary data from the field survey. “The data shows that every one million rupiah of PT Agincourt Resources capital spent, it has potential to increase around IDR 0.82 million (US$ 63) of GDRP (Gross Regional Domestic Product) in North Sumatera Province,” he said.

In addition to the contribution in economic and fiscal sectors, in its fifth year of operation, Martabe Gold Mine has given a positive contribution in improving the service quality of health, education, training, and capacity development for farmers, men, women, and youth, as well as infrastructures constructions in 15 direct affected villages to improve the community access and quality of life.
Coordination Foreign Investment Board for Regions I, Agus Joko Saptono revealed that the realization of investment at South Tapanuli in 2016 reached IDR 1.7 trillion (US$ 130.76 billion) (9% from the investment realisation at North Sumatra province). Agus Joko explained that the mining sector in South Tapanuli totally contributed around IDR 900 billion (US$ 69.23 million) or 52.9 % from the total of investment in North Sumatera province which reached IDR 18.8 trillion (US$ 1.44 billion) 3,1% from national investment realization. “The contribution from mining sector around IDR 2,2 trillion (US$ 169.23 billion) or 11.7% from the total investment in North Sumatera, hence it is still a big opportunity for the provincial government to develop the potential of the mining industry,” he said.

President Director of PT Agincourt Resources, Tim Duffy stated that as the mining company continues to grow and develop together with the local community, this research result provides the measured data which indicates that Martabe Gold Mine gives a substantial contribution to the economic growth rate in Batangtoru, South Tapanuli District, and North Sumatera. “This research report of Economic and Fiscal Impact Analysis confirms the outlook that the productions and employment opportunities improving the income of community, are strong positive factors contributing to a high standard of living,” Tim said.

Tim reiterated that Martabe Gold Mine is committed to successfully manage safe and efficient operations, environmental impacts, and to ensure that our presence provides a long-term positive social benefit for all local stakeholders for years to come. 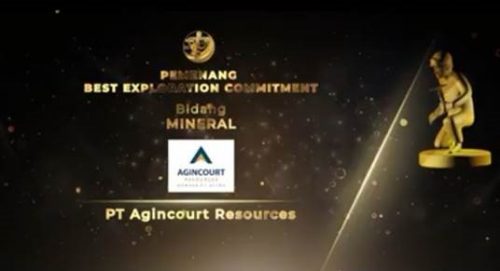